Veganism has already taken the world by a storm, instigating the much-needed food-revolution. Until recently, veganism was considered as something outwardly but with more and more people adopting the vegan lifestyle, the food-movement has started gaining accolades among the masses. To contribute towards the same, Select CITYWALK in association with SBI Card organized the largest Vegan Festival of India, WilderFest on 8th and 9th December 2018. 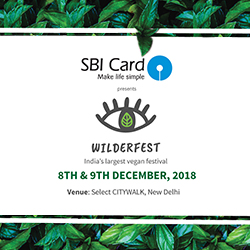 With amazing talk-sessions, workshops, vegan food-joints, flea-market, music, and several other fun- activities, the fest was aimed at making people aware about the advantages of adopting a vegan lifestyle and how veganism is more than just excluding meat and dairy items from your diet. From environmentalists to animal-lovers, vegans to non-vegans, the fest was well- received by the masses. The festival not only helped people in choosing a healthier lifestyle but also opened their eyes to a more compassionate way of living. Needless to say, it was an extravaganza with a deeper purpose to serve.

While the workshop by Khushboo Gupta, baker and founder of Nutriva, a plant-based mylk brand, helped people understand the basics of making milk at home, Vasu Primlani, a prominent stand-up comedian and an environmentalist, gave the much-needed insights on the environmental impacts of including meat and dairy in our lifestyle. In an interactive talk-session about Reversing diseases with food, Seema Bali, a housewife, Poonam Sharma, a dietician, and Dr. Sujata Mittal, a gynecologist got people together for talks on healing body through plant-based diet. 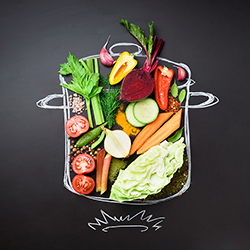 Sessions like My Vegan Story by Angel Bedi aka TheFilmyOwl, Humans wrong, Animals right by Erika Abrams, co-founder of FIAPO, How to build muscles on a vegan diet by Nidhi Mohan Kamal, a food scientist, and Why plant based by Subah Jain inspired a lot of people to follow the vegan lifestyle and lead a healthy life. Interactive food workshops by Jitin Munjal, co-founder of JusAmazin and Daisy Pruthi, owner of LovingHut, a complete vegan food-delivery outlet in Gurgaon, made some amazing vegan dishes and inspired people to adopt vegan cooking. Towards the end of the festival, the musical performance by Stefan Kaye and his group The Jass B’stards enthralled the audience.

WilderFest provided vegans, liberal vegans, and non-vegans a safe space to explore the green goodness surrounding them and encouraged them to adopt a lifestyle which is both accessible and practical.