Over the past few decades, plastic has entirely revolutionized the consumer economy. From a novel invention, it has now become an indispensable part of our daily routine – found in the form of tools, toys, clothing, construction and not to mention, food and beverage packaging. Since the 1950s, production of plastic has risen from 2 million metric per year to over 350 million tons per year in 2015. Rise in demand and production over the years has been met with inadequate checks in place, leading to harmful plastic pollution – to the extent of turning into a global epidemic today.

In its endeavours to fight back the menace of plastic pollution, Select CITYWALK has been organising numerous public events and inspiring people to contribute their bit towards creating a plastic-free, healthier environment.

Inspired by the 150th birth anniversary of Mahatma Gandhi, Select CITYWALK recently organized a ‘Satyagraha Against Plastic’ beginning September 28. The initiative involved several activities including the installation of the 150 charkhas in partnership with Pearl Academy of Fashion. The space was home to an inspiring installation of Mahatma Gandhi urging people to give up plastic. 20 artisans from around the country were brought together under one roof to educate people about sustainable living and encourage them to try spinning their own yarn using a Charkha. 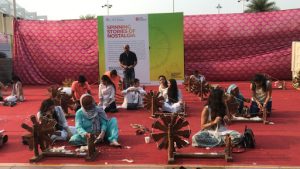 Popular theatre group Jazba in collaboration with Malviya Nagar-based NGO Aarohan and New Delhi Institute of Management, Tughlaqabad took the responsibility of spreading awareness about the perils of plastic pollution through street plays. On October 2nd, Pearl Academy also organized an exciting fashion show to celebrate khadi and its different versions featuring contemporary silhouettes and designs. The aim was to urge people to switch to sustainable fashion through handloom. In addition, special stalls were set up by NGOs such as Goonj, Chero and Trash to Cash to sell non-plastic items and give away cloth bags. All positive thoughts and messages were penned down by guests on a ‘signature wall’, also used to pledge action against plastic pollution. 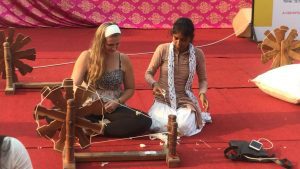 In another attempt to combat plastic pollution, Select CITYWALK has urged people to drop off the insignificant plastic items lying around their house for recycling. All the plastic waste was collected at The Plaza.

So if you haven’t got an opportunity to visit Select CITYWALK yet and become a change maker by doing your bit towards saving the environment, this is your chance. Individual action against plastic pollution doesn’t necessarily need to be complex or difficult to do. Every small contribution can go a long way in spreading awareness and together making a real difference.